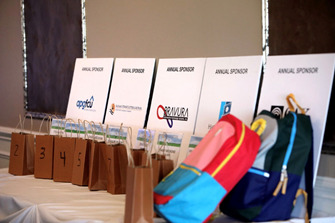 Harford County Education Foundation hosted their 4th
Annual Chip in Fore Kids Golf Classic;
a team-based golf tournament thrown to encourage community bonding while
gathering and donating funds towards the county’s education system. Being a
company that values academic advancement, Bravura took on a leadership position
and joined the tournament as a corporate sponsor.

The event started early with an 8am breakfast at Maryland
Golf and Country Club, followed by a welcome ceremony and a 9:30am gunshot
signifying the start of the tournament. The chosen course was a 6,631-yard
greenery with 18 holes and tree-lined fairways. As beautiful as it is, the
championship course was designed to impress and test golfers of all skill sets with
its land elevations and water obstacles.

Some of Bravura’s own were up for the challenge and formed a
team alongside other notable companies in the surrounding Harford area. After five
hours of golfing, the attendees headed to a provided lunch and awards ceremony
where contests winners were given cash prizes. Everyone had a great time, and
no matter the outcome of the game, being a part of such an influential
fundraiser deemed everyone involved a true winner!